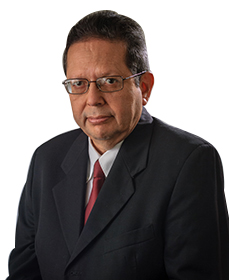 Experience: Jaime Garro has extensive experience in the field of Criminal Law, especially in economic, environmental and traffic crimes, both in the defense and the formulation of complaints and compensatory civil proceedings for compensation for damages. He has served as head of the legal department of the National Insurance Institute and has advised insurance claims in tort and maritime claims, in private practice.

Jaime Garro represented the Civil Defense in the compensation claim for damages against a multinational oil company regarding the explosion of a service station, which killed two children and injured some people, through conciliation, satisfactory to all concerned.

He in the defense advised a pineapple producing company that was prosecuted for damages and environmental pollution, achieving their client’s acquittal in a long judicial process.

Finally, he defended both the company of fruit concentrates and its managers in their personal capacities, which were accused of environmental pollution, achieving the acquittal of the accused in the intermediate stage of the process.