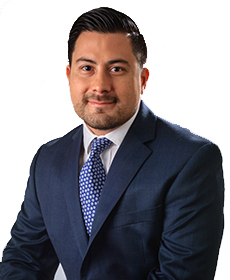 Eugenio Vargas counts with 15 years of experience in the legal field, where he has served both as a lawyer in practice in law firms, as well as in-house lawyer in the corporate field.

At the beginning of his career, during the years 2004 and 2005, he served as an associate lawyer in the areas of Immigration and Corporate Law at Lexincorp Costa Rica, which at that time was known as André Tinoco Abogados. In 2005 he then departed to Spain to undertake a Masters (LLM) in Business Law.

Upon his return to the country in 2007, he began to work as an associate lawyer in the law firm called Cordero & Cordero Abogados until mid-2012, where he accumulated extensive experience in the areas of Corporate Law, Real Estate Transactions, Insurance Law and Industrial Property Law, advising mainly foreign investors with interests of investments in the country.

Later on, he served as in-house counsel in the legal department of Walmart, specifically as Formalizing Assistant Manager, in charge of contracts for the purchase and sale or rental properties for the entire Central American region.

Since 2013, Eugenio Vargas has worked at Lexincorp Costa Rica, in the area of Real Estate (Real Estate Transactions), Corporate Law and Labor Law, where he is responsible for the attention of both corporate clients in areas such as tourism, hospitality, construction, forestry, manufacturing industry, among others, as well as individuals willing to invest in the country

Along with one of the partners of the office, Eugenio Vargas was in charge of one of the largest transactions the firm had seen in its almost 30 years of history, involving the acquisition of 106 farms in the provinces of Guanacaste and Puntarenas (Costa Rica), mainly engaged in the plantation and reforestation of trees. Due to the size of the transaction, it was carried out through the figure of Sale of Commercial Establishment or Bulk Sales Procedure. Since it involved the sale of most of the seller’s assets, the transaction involved a due diligence of nearly 10 months prior to closing, which covered the study of the properties on a registrational and municipal level, such as the environmental authorities, as well as corporate and financial studies of the company. The transaction amount was of US $32,000,000.00 and was signed in December 2013.

In June 2014, a Purchase Agreement of a Hotel and the Transfer of Shares was signed by a company that had already operated similar businesses in the area, by this means completing the process of preliminary negotiations for the acquisition of a hotel in Playa Tamarindo, Guanacaste (Costa Rica). Eugenio Vargas was in charge of the transaction, which involved a process of due diligence of both the legal, accounting and financial aspects, as well as signing a guarantee trust agreement for the transfer of the shares of the target company, the price of the transaction (US $2,300,000.00) being paid to the seller through tracts.

In March 2015, the purchase of a hotel located in Playa San Miguel, Nandayure, Guanacaste (Costa Rica), of the amount of US $475,000.00, was concluded. It was carried out through the figure of Sale of Commercial Establishment or Bulk Sales Procedure, culminating a process of negotiation of 3 months and the implementation of a due diligence of both the legal and accounting aspects.