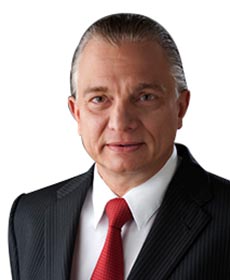 Dr. Arnaldo André is not active in the Firm from 2022 to 2026 because he is holding the position of Minister of Foreign Affairs and Worship of Costa Rica.

Dr. Arnoldo André is the Senior Partner of Lexincorp Costa Rica. He is recognized as one of the most leading attorneys in Costa Rica and maintains strong links with communities of the European and North American business sector in the country.

He currently holds the position of General Honorary Consul of Norway in Costa Rica, has been president of the Chamber of Commerce of Costa Rica.

Dr. André is Legal Counsel of the Embassies of Germany, Switzerland, Norway and Austria in Costa Rica and acts as a member of several boards of companies in the country.

Dr. Arnoldo André has been the leading manager of the largest investment in reforestation in the country, having organized and carried out the purchase of more than 10,000 hectares of land in Costa Rica and more than 3,000 hectares in Nicaragua with the company Novelteak, over the past 25 years.

He has participated in complex acquisitions, highlighting the negotiating of the purchase of hotels (Tamarindo Group Diría) and Hotel Bahia del Sol, in Guanacaste, and of agro-export and industrial plants (Fructa CR SA) in the province of Limon.

Dr. Arnoldo André has presided over a large number of arbitral tribunals at the Center for Conciliation and Arbitration of the Chamber of Commerce of Costa Rica, having a hundred percent confirmation of his arbitral awards by the Supreme Court.

From the presidency of the Chamber of Commerce of Costa Rica, he has successfully founded and organized the Costa Rican Franchise Center and has actively participated before the Costa Rican Congress in the discussion of important legal reforms in the country, where he emphasizes the reform of the taxation laws of Costa Rica.