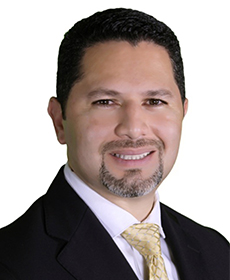 Benito Zelaya’s practice is mainly focused on business law and has been developed throughout the Central American region, structuring projects in corporate and regulatory law, such as dispute resolution. During his practice he has acted as consultant, advisor and litigator for different institutions in the commercial, banking, construction, pharmaceutical, telecommunications, energy, mining and NGO sector. In addition to his legal practice, Benito Zelaya is a speaker, trainer and consultant of the Chamber of Commerce and Industry of Tegucigalpa, through which he has been invited to provide national and international Conferences by the Chambers of Commerce of the Central American region as well as the International Chamber of Commerce on issues regarding international and domestic arbitration.
He has participated in various conferences, forums and seminars on corporate, banking, energy, construction and arbitration law, among others and has been trained in international and domestic arbitration, under the rules of ICSID, ICC, CIAC, AAA and by the main centers for conciliation, mediation and arbitration in the region, respectively in different countries such as Honduras, El Salvador, Costa Rica, Colombia, Panama, and USA. He is the founder and president of the Spanish Arbitration Club in the Honduran chapter, a member of the Central American Arbitration Group and has been a member of the board of young entrepreneurs in the Chamber of Commerce and Industry of Tegucigalpa.